by: Sayegh, Chels in: Uncategorized 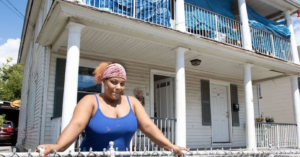 Lakeisha Henderson outside her home Thursday in Waterbury. Every February when her lease is set to expire at her three-bedroom apartment on Division Street, Henderson considers moving her family to a one-family home with a fenced-off yard. But her attempts come up short. She hasn’t found a landlord willing to accept her housing choice voucher, which helps keep her housing costs affordable.

WATERBURY — Every February when her lease is set to expire at her three-bedroom apartment on Division Street, Lakeisha Henderson, 37, considers moving with her six children to a one-family home to escape the dangers of gunshots and drugs.

She hasn’t found a landlord willing to accept her housing choice voucher which keeps her costs affordable.

“I am willing to move anywhere just to make sure my babies have somewhere nice and safe to live,” Henderson said, “but it’s hard.”

Henderson is not alone.

Hundreds of low-income residents in Waterbury and across Connecticut are struggling to find landlords willing to accept federal Section 8 housing vouchers, funded through the U.S. Department of Housing and Urban Development.

Inflation and the COVID-19 pandemic are causing landlords to turn away from voucher holders because they are setting high rental prices, above HUD’s fair market rents, that only non-voucher holders can afford, city and state housing officials say.

Vouchers allow low-income residents to afford private units as long as they find a landlord to take it. Fair market rents are set at the area’s 40th percentile.

In the past, landlords favored fair market rents because they were often higher than rents for non-voucher holders, said Chris D’Orso, executive director of Waterbury Housing Authority. Now, he said he’s hearing some landlords setting rents for two-bedroom units at $2,000.

The fair market rent for a two-bedroom unit in Waterbury and the surrounding area is $1,190, HUD figures show.

The median rent of such a unit is $1,200, a 9% increase from last year and a 4% jump from July, according to rental website Zumper. That’s just the median, however. Bob DeCosmo, president of Connecticut Property Owners Alliance, said he sees some units going for 15% to 20% higher than pre-pandemic.

About 200 voucher holders are feeling the pinch in Waterbury, D’Orso said. The 2,100 vouchers the authority receives from HUD are all in use, leaving staff to find additional vouchers through grant funds, he said.

“There is just such an incredible rental shortage right now in Waterbury,” he said. “That’s the number one complaint that we are hearing from people who when their lease is up want to move out of their current landlord’s apartment. No one can find housing. It’s just incredible.”

DeCosmo cited eviction moratoriums during the COVID-19 pandemic as massive drivers behind the nationwide predicament. The moratoriums shut down the supply of available housing units, creating an artificial demand that drove rents up, he said.

While the state and federal moratoriums were lifted last summer, rental costs remain sky-high due to inflation of lumber, insurance and utilities, resulting in increased operating expenses for landlords, DeCosmo said.

Realtors have told DeCosmo some Section 8 voucher holders are coming $100 to $150 short of what the landlord needs for the vacancy, he said.

“There’s a point here, too, that people need to understand: Only $9 of every $100 in rent is literally profit for the landlord,” DeCosmo said. “The rest of those dollars are going to operating expenses. It’s not like people are getting wickedly rich off running these properties.”

Under state law, landlords can’t discriminate against someone based on their lawful income when they’re buying or renting a property, said Steve DiLella, director of the Individual and Family Support Program Unit for the state Department of Housing.

“Rents rose so darn quickly in the past year that HUD’s ability to keep up with that has not kept pace, but I do believe that will be rectified really, really soon,” DiLella said. “That should at least bring some a little bit of competitiveness for our folks who have Section 8 vouchers to the market.”

Some voucher holders have found units after J. D’Amelia received a HUD waiver in May to increase its maximum payment standard to 120% from 110%, making vouchers more competitive, Molina said.

Housing authorities determine payment standards between 90% and 110% of the fair market rent to calculate the amount of housing assistance voucher holders will receive. Holders must pay 30% of monthly adjusted income for rent and utilities.

Once HUD sets the 2023 fair market rents in October, the Waterbury Housing Authority will consider whether it will seek a HUD waiver to increase its 110% payment standard to 120%, said Dana Serra, director of leased housing programs.

Lakeisha Henderson outside her home Thursday in Waterbury. Every February when her lease is set to expire at her three-bedroom apartment on Division Street, Henderson considers moving her family to a one-family home with a fenced-off yard. But her attempts come up short. She hasn’t found a landlord willing to accept her housing choice voucher, which helps keep her housing costs affordable. Steven Valenti Republican-American

J. D’Amelia usually issues a 90-day window with two 30-day extensions for voucher holders to find housing. But as Molina saw many vouchers expire last winter and early spring, she said she received a waiver in May to extend all vouchers through Dec. 31.

Individuals have to reapply when vouchers expire, but only when waiting lists are open. J. D’Amelia’s waiting list is 1,211, Molina said.

The agency received more than 85,000 applications when it last opened the waiting list in August 2014, but only 5,000 were accepted in a lottery drawing for waiting list placement, she said.

“I can’t even imagine what that number would be for us at the present time because of the desperate situation that so many individuals are in,” Molina said. Waterbury Housing Authority has a waiting list of 857, a decrease from 1,100 at the beginning of 2022, Serra said. The authority will look to open the list for the first time since 2016 when it gets down to 500, she said.

Landlords also are shying away from Section 8 due to the program’s required inspections, DeCosmo said. Inspections are done annually and before a tenant moves in. Any damage found inside the units comes at a cost for landlords, but if it’s tenant-caused and actions aren’t corrected, assistance may be terminated.

“The program has become more bureaucratic over time,” DeCosmo said. “When I first got in the industry Section 8 guidelines were safe, decent and sanitary housing whereas today when you’re trying to get a Section 8 lease up, the unit has to be damn near perfect or it doesn’t get qualified into the program.”

Update: In response to the above article, Republican American published the following article on August 24th.

Government makes housing less affordableAs readers of front-page stories in the Aug. 21 Sunday Republican and Aug. 22 Republican American know, low-income residents are frustrated with their housing situations. In the earlier story, residents of the River’s Edge mobile home community in Beacon Falls explain that the property’s new owner is raising rents quickly and aggressively, and they’re calling for rent-control policies to stem the problem. In the later story, a Waterbury woman trying in vain to move her family into a safer neighborhood is highlighted as an example of the issue of landlords declining would-be tenants who use Section 8 housing vouchers. In both cases, government action is the cause of the problem, and further intervention into the private market can only be an exacerbating force.

In the case of Section 8 vouchers, inflationary policies combined with the federal government’s 2020-21 eviction moratorium have caused rents to rise past the point where the vouchers make homes affordable. Additionally, the cost of doing business with Section 8 beneficiaries is raised by regulatory burdens that landlords are no longer willing to shoulder. “The program has become more bureaucratic over time,” Bob DeCosmo, president of Connecticut Property Owners Alliance, told reporter Lance Reynolds. “When I first got in the industry Section 8 guidelines were safe, decent and sanitary housing whereas today when you’re trying to get a Section 8 lease up, the unit has to be damn near perfect or it doesn’t get qualified into the program.” So in trying to ensure Section 8 tenants have perfect living quarters, state policy is inadvertently killing their housing prospects.

In the case of the mobile home community, residents and advocates are calling for a Fair Rent Commission to impose rent-control policies on the owner, who has cited inflation as a reason for rising rents. To understand the possible ramifications of that policy, one should look to the housing crisis currently underway in Ireland, which in 2016 instituted so-called “rent pressure zones” for low-income citizens.

“Report claims rent controls have backfired and worsened crisis,” the Irish Times noted in a May headline. “The study by economist Jim Power suggests that rent pressure zones … have resulted in significant ‘rent rigidities’ and an inefficient two-tier system where the proper maintenance of rental properties is no longer economically viable. This has prompted many smaller landlords to exit the market and to be replaced by institutional landlords with new stock at higher rents,” according to the story.

Fast-forward to Aug. 10, when the Irish Examiner reported that there were only 716 homes available for rent in the entire country of 5 million people. The huge demand and paltry supply led to “the highest monthly rent increases in more than 15 years,” according to the report.

Why does government intervention cause such a destructive domino effect? The Aug.22 Republican-American story gives crucial context. “Only $9 of every $100 in rent is literally profit for the landlord. The rest of those dollars are going to operating expenses. It’s not like people are getting wickedly rich off running these properties,”  Mr. DeCosmo explained.
Much like their tenants, landlords are in a precarious position. Forcing them to accept smaller profit margins and agree to onerous inspections isn’t going to work; inevitably, supply will drop and prices will rise as landlords just leave the market altogether. Further government interference into the economy can’t solve problems spurred by government action in the first place.